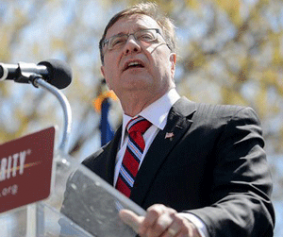 Steve Lonegan has dedicated his time in public life to fighting for New Jersey taxpayers. He developed strong convictions about freedom and economic liberty in the private sector while building and managing retail, custom home-building and manufacturing businesses, employing dozens of workers.

When he became mayor of Bogota, NJ in 1996, Steve cut municipal spending, eliminated wasteful and duplicative services, privatized some functions and instituted a more cost-efficient, user-friendly government. As a result, Bogota’s municipal spending remained constant for the entire 12 years of Steve’s tenure. He also kept debt and tax increases far below inflation despite massive state mandates and aid reductions to suburban towns like Bogota.

Thanks to Steve’s strong, conservative leadership, Republicans kept council control for 11 straight elections, and Steve was reelected in 1999 and 2003 by double-digit margins over his Democratic opponents. During his time as mayor, Steve also led statewide campaigns on behalf of New Jersey taxpayers. Whether it was fighting the Newark Arena, illegal state bonding, or proposed gasoline tax hikes, Steve was willing to take on leaders in both parties to do what was right for New Jersey’s working families.

In 2006, Steve joined Americans for Prosperity as state director of the New Jersey chapter where he continued to fight for taxpayers and achieved a number of successes. He helped defeat an 8 percent sales tax increase on the statewide ballot, led the successful fight to stop Governor Corzine’s $38 billion toll hike, and led the defeat of taxpayer-financed legislative elections in the state.

In 2013, Steve Lonegan won the statewide Republican Special Primary for U.S. Senate after the death of Sen. Frank Lautenburg by a wide margin. Following that victory, he ran a relentless campaign against now U.S. Senator Cory Booker, but lost by half the margin that the previous Republican presidential nominee lost the Garden State. Lonegan halved Romney’s New Jersey losses despite being outspent by a margin of 8 to 1. The Weekly Standard editorialized Lonegan’s relentless campaign against Booker by stating, “Conservatives not just in New Jersey but the nation owe Lonegan a debt of gratitude for the underfunded yet exciting campaign he waged, and what it suggests for the future of Republican politics.”

Steve Lonegan was born in Teaneck’s Holy Name Hospital and grew up and graduated from high school in Ridgefield Park where he set several high school track records. Steve earned a B.A. in business administration from William Paterson College where he was football team captain and an All Conference Division Center. In 1981, he earned an M.B.A. from Fairleigh Dickinson University.

Steve and his wife Lorraine (Rossi) were married at St. Joseph’s Catholic Church in Bogota in 1981, in the same church where Steve’s father Arthur and his mother Marie Trapani were married in 1955. Steve and Lorraine have two adult daughters, Brooke and Katharine (Parany). Katharine was married to her husband Kevin at St. Joseph’s Church in 2012, and gave birth to Steve and Lorraine’s first grandchild on Steve’s birthday in 2014.

Steve and Lorraine were parishioners at St. Joseph’s Catholic Church for more than five decades, but have attended St. Pio’s Roman Catholic Church since moving to Lavallette.